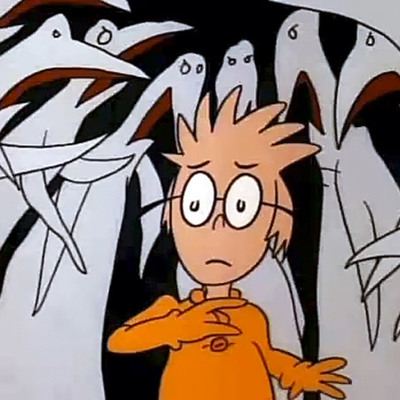 @lynnesbian@deadinsi.de this is a comic I like about technology

@fragamacrunch @lynnesbian I like this comic because it's been so decontextualized that it looks like Paul is being a truth teller but in reality he's just a irony bro shitting on people for having a life when he doesn't.

@_ampersand @lynnesbian@deadinsi.de but it’s both, isn’t it? Paul is applying truth unfairly to lash out at his friends.

This is going to sound sarcastic, but I mean it genuinely: I am very interested in your takes on PfSC, I don’t meet many people with thoughts on it

@fragamacrunch I'm a little dubious about any of my own takes, because I'm working from near decade memories because RIP. I used to identify with Paul, but now he seems Cartman-esque, like he is the ectoplasmal embodiment of being a boring party pooper. If I were being kind, I'd say he's a Ligotti figure, unable to enjoy things and that making everything around him absurd. But that seems unreasonably overcharitable: he's just miserable and is mad that not everyone else is as miserable as him.

@fragamacrunch My scorching hot take on PfSC is that it indirectly buried the "xkcd is bad because the characters have no details in their drawing" argument, and that is probably the main impact it has had on the public.

@_ampersand that’s a bummer to think about, but I really can’t argue against it :/